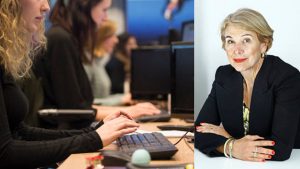 ‘Listen guys, d’you want to talk about the game? See you in the gent’s at coffee time…’

Would you believe it? Chat about football, cricket and other sports should be ‘actively curtailed’ in the workplace according to dingbat Ann Francke, Director of the Chartered Management Institute. According to Mizzz Francke, sports chat can exclude women, and can be (wait for it) ‘a gateway to more laddish behaviour’, and if unchecked, ‘is a signal of a more laddish culture’, such as boorish sexual banter.

Christ on a bike, where do they find the fuckwits who come up with this nonsense? In a stupid factory somewhere? For a start, these comments are actually sexist. Millions of women up and down the country follow, and indeed participate, in sport of all kinds. To suggest that they are poor little dears who might feel left out and unable to take part in a sport-related conversation is ludicrous. At the same time Francke suggests,rather oddly, that ‘talking about technical aspects of football, such as video assisted refereeing,could disproportionately exclude women’. She seems to be implying that in fact, women are too thick to appreciate such things, which doesn’t strike me as being a very consistent line of argument. Or indeed very sisterly.

What happens then, when the conversation turns to films, or kids, or the weather, or holidays? Is everyone who isn’t interested in these things presumed to be left feeling excluded? Taking Francke’s line of thinking to its logical conclusion, talk about anything other than work-related matters would have to be ‘curtailed’. And as for her assertion that sports chat can lead to a more uninhibited type of conversation, I can only respond by stating that in any of my places of work over the years, women have never been backward in coming forward as far as sexual banter is concerned. There’s a bit of a ‘ladette’ culture about as well, if my experience is anything to go by. No mention of that though by Francke.

I do find it odd then to think that all these strong, empowered women we keep hearing so much about are simultaneously in need of measures to protect against any bruising of their delicate sensibilities. I don’t know, maybe I’m just being a bit paranoid; maybe Francke’s comments are nothing more than another banal bit of SJW-type posturing, making what she thinks are the right noises. Yet these comments do seem to me to be indicative of the kind of thought police mentality we get so much of these days, putting men in the sights of the identity politics warriors again. Moreover they smack of hypocrisy. If some bloke suggested that women should be ‘curtailed’ from talking about make-up, handbags, clothes or whatever, this banshee would no doubt be wailing ‘misogyny!’ and ‘sexism!’, and ranting on about men wanting to control women. I conclude that this self-styled ‘expert on gender balance in the workplace’ only believes in free speech when people like her get to define what it actually is. Methinks that here’s another one who’d like to control the narrative to suit her own agenda.

I’m with Piers Morgan on this, who responded by saying ‘we’ve got to stop these virtue-signalling cretins sucking all the fun out of life’. No doubt many of you out there in IsACland will go further, and demand that this gobshite should get back in the kitchen and put her old man’s tea on.

80 thoughts on “Ann Francke (No, not the little Dutch girl with a diary, it’s some other cunt)”