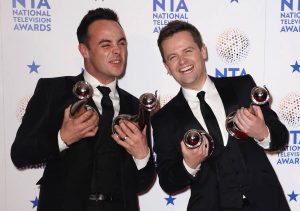 Let’s give a great big annual cunting to the shitfest known as the the No Talent Awards – won unsurprisingly for the 19th consecutive year by the most irritating pair of National Twats on television, Ant and Dec. Who the fuck let these two escape from children’s televion? Even there they were stretched way beyond their abilities.

So last night we are subjected to a presenter who thought it the height of comedy to drop his trousers (Brian Rix must be turning in his grave) handing out the usual gongs to the same old tired bunch of has beens.

Is television fucked? Based on this, I’d say so…

Now then , now then, how about a monumental cunting of universal cunting for this, For fucks sake those two Geordie cunts are up for the 19th nomination, for Christ sake, the hypocrisy of itv, when a drunken piss head Geordie gets nicked for drink driving he gets his bum hole licked clean and it all gets forgotten about, when a blonde female presenter gets nicked for a domestic, she gets a total cunting from everyone, itv? You’re a bunch of hypocrital cunts. Go fuck yourself ITV