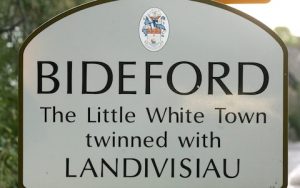 A head in the hands, ‘oh for fuck’s sake’ cunting for the Town Council of Bideford, Devon.
In 1855, author Charles Kingsley dubbed Bideford ‘The Little White Town’, due to the number of white buildings in the locality. Now the council has decided to change ‘welcome’ road sign bearing the description because of complaints that they’re (get this) racist.
A survey on the issue showed 31% in favour of the change, with 69% against. So; in spite of the fact that (a) it’s blindingly clear that the description derives from buildings and (b) the majority of opinion was against the change, the knock-kneed fuckers on the council went ahead anyway, in order to appease a few snowflakes who take offence on behalf of others.
In a decision demonstrating a magnificent ability on the part of the council to split hairs, signs will now read ‘Charles Kingley’s “Little White Town” (1855)’. As far as I can see, this is a difference that makes absolutely no difference. The perpetually offended will still get the hump, and it will only serve to encourage the deranged cunts to persist in the pursuit of their ludicrous SJW agenda.
In further developments, Blackpool is changing its name to Neutraltonepool, and henceforth, Redbridge will be known as Rainbowbridge. Okay, I made the last bit up of course, but I wouldn’t put it past some cunt to demand it. It’s only a matter of time.