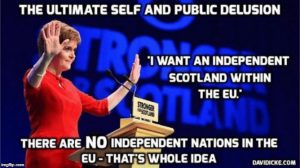 How fucking deluded are these cunts?

‘An SNP victory in the next Scottish Parliament election could give the party a “mandate for independence”, one of the party’s senior MSPs has claimed.

Alex Neil said winning the election in 2021 would potentially allow the SNP to begin independence negotiations.’

The election he refers to is for the Mickey Mouse asylum in Edinburgh, which is of zero consequence elsewhere.
Do these cunts realise that Scotland is not a viable economic unit?
Do they think the EU is just waiting for them to join and add to the begging bowl members?
Do they realise that the Euro favours strong economies at the expense of weaker ones?
Wouldn’t a ‘hard border’ be a problem? For them but not to us.
No more shipbuilding for the Royal Navy?
There is only so much whisky, haggis and shortbread you can export?
Can they maintain the volumes of skag that feed the inner city schemies?

Give the fuckers another ‘once in a lifetime’ referendum and let the rest of us vote on it as well. I am fucking sick of this minor fucking backwater and it’s delusions of grandeur.