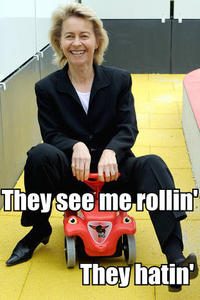 An Ode To Joy Kraut cunting please for Juncker’s successor, for not only does she looks as if she pisses her drawers and shat her brains out on the crapper, she seems to be deaf where democracy is concerned:-.