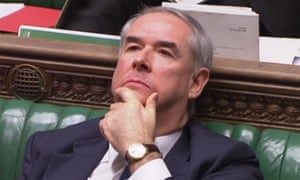 ‘Grow up and get real’. Thus spake our illustrious Attorney General Geoffrey Cox recently to MPs demanding the publication of the government’s full legal analysis of Mrs May’s Brexit ‘deal’. Cox refused to allow full disclosure. ‘It’s no use baying and shouting’, Cox told the Commons. ‘What I’m trying to do is guard the national interest’.

Methinks I detect the scent of a very large rat. Followers of the Brexit shenanigans will know that a summary of the advice has already revealed that some UK laws can still be overruled by the EU post Brexit. Oily Robbins has also admitted that the UK has not won the argument on frictionless trade, hence the woeful ‘backstop’ proposal.

You claimed, Mr Cox, that your actions were ‘in the national interest’. Well, this is indeed a decision crucial to the interests of each and every one of us. How exactly is it ‘in the national interest’ to deny potentially vital information to the country’s elected representatives in such a situation, not to mention to the citizens who pay your hefty salary?
Here’s what I think. I think it likely that the full text contains more information and opinion that is very unpalatable to the government, and potentially very damaging politically to May and her ‘deal’. I believe that you don’t want this to see the light of day, so you tried to use ‘the national interest’ line to keep it buried. If the advice was so positive for the government, I venture to suggest that you’d be falling over yourself to see it published in full.
Still, whatever information the complete document actually holds, and whatever your motives were, you’ve failed anyway.

For the first time in our history, MPs have voted that the government be held in contempt of Parliament on the matter. Your hand has been forced; Andrea Leadsom says the full assessment will now be released and indeed it must, or there will be absolute hell to pay.

I hear that you’re a very able man, Mr Cox, potential Prime Minister material. In all honesty, I have to say that to me, you looked like a shifty dissembler, a man prepared to deceive and deny by hiding behind a smokescreen of bluster. You sure as hell acted in SOMEONE’S interest, but I have my doubts that you were acting in the NATION’S interests, and you insulted our intelligence when you resorted to this flimsy ploy. Contempt of Parliament? I reckon your actions demonstrated contempt for THE PEOPLE. Well I’ve got contempt too.

May I therefore respectfully suggest sir, that you fuck right off? In the national interest, of course.