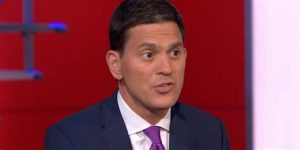 Following hot on the heels of the Princess Anthony, Banana Boy David Miliband, now a resident of the USA has popped up on The World At One (where else?) to give his little opinions on Brexit.

The Poundland Blair is nearly a big a cunt as his master, but why do the BBC insist n dragging every fucking has been out of their sewers?. Fuck the bastards.