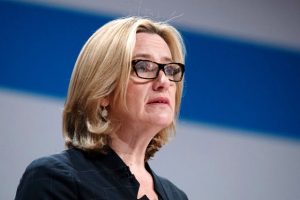 As London’s murder rate overtakes that of New York, the Home Secretary Amber Rudd says that “Police cuts are not blame.” Most people in the country are still rubbing their eyes in disbelief as they read this unbelievable sentence; yes, they can’t believe Amber Rudd is STILL the Home Secretary.

No doubt the copious killings are all to do with social media and nothing to do with the shying away of Stop & Search. Yes, definitely no correlation there, Rudd.

Shadow Home secretary Diane Flabbapotamus is on holiday in McDonalds and was therefore unavailable for comment.

It doesn’t matter that Rudd’s face resembles The Emperor’s from Star Wars, nor that she dresses in a sexless Hilary Clinton suit, she’s just shit at her job.

Rudd is currently the second worst person in the country to be the Home Secretary. She is an incompetent cunt, swimming far out of her intellectual depth and she and her Emperor-like face should be sacked.