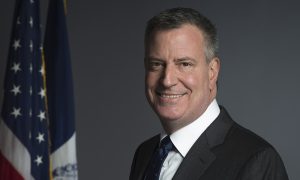 This fucking clueless muppet not only had the murdering fenian cunt Gerry Adams over to New York as some kind of special guest but he declared St Patricks day in New York is now Gerry Adams day!!!!! What the fuck !!!!!! are Americans really this fucking stupid?

Gerry Adams is no fucking different to Osama Bin Laden you fucking moron who, if you don’t remember, organised the death of thousands of innocent people, in your fucking city!! Just like Gerry fucking did for 30 odd years.

The mind boggles and the piss boils .I wonder if this cunt de Blasio would think the same if he saw his Dad get shot in the fucking face on his doorstep one Sunday morning. I very much doubt it.CUNT

De Blasio recently showed his support for the religion of homicide bombers by declaring, “I am Muslim”. You’d be hard pressed to find a politician more left wing than this fucker. He even makes Corbyn look like an amateur.