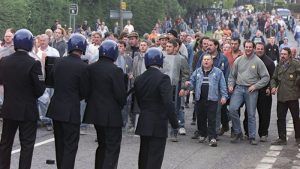 I would like to nominate whinging miners for a cunting. The latest excuse for these cunts to start moaning is the fact that there will be no Orgreave Inquiry (after the police rightfully put the boot in on their illegal picket during the miners’ strike of 1984).

Then you get the fuckers bemoaning a Thatcher government for closing the pits. Ok fuckwit miners want to know who really closed the pits? Arthur “fucking” Scargill that’s who!

My dad was a miner from 1954 until 1988. He went through the strikes of the early 70’s (balloted) but disagreed entirely with that ginger get Scargill who did an “everybody out” on *HIS* say so because *HE* thought *HE* was the big I am. There was no ballot and therefore it was an illegal strike.

In the end when the mines did finally close he said: “What the hell did he expect, holding the government to ransom every time Maggie farts in the wrong key!”

The most gauling thing (to my Dad) about the closures brought on by Scargill’s arrogance – because that’s what is was, plain and simple – was the fact that a) the cost to make coal burning power stations clean (the govts excuse for the closures) was a fraction of the cost to convert them to oil/gas powered ones, b) at the mine where my Dad worked, the geologists had found seams that would have taken 40yrs to deplete (at the rate of mining at that time).

He also told me: “Won’t be in my lifetime. MIght not be in your lifetime but when the gas and oil runs out there’ll be some bright spark in government who’ll say oh we’ve got all this coal to mine, except there’ll be no one in the country who knows how to do it any more!”

Oh and as for the Orgreave mob – like most of Scargill’s millitant fuckwits – they gave as good as they got and those miners who chose to work (which was in their right because it was an illegal strike) no doubt appreciated the bags of piss and shit thrown at them (along with the police escorting them legitimately into work).

I have no love for the police but if any filthy cunt threw a bag of piss at me then I’d twat them upside the head as hard as I could fucking muster with my truncheon, you cunts!

There’s a reason why Scargill went into the union side of things because he was a shit miner and he was a lazy cunt, end of.

Most of the miners of the time should be due to cast off their mortal coils (like me dad did 10yrs ago) and do everyone a favour and fuck off! I’m fed up of your twisting and whinging, when you have nothing to twist and whinge about! It’s called “just deserts” you cunts!