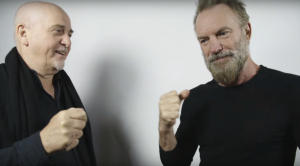 Peter gabriel and Sting are a couple of cunts!

The thick as a brick cunts are at it again but this time the bellends are gonna tour together for some easy money. The last thing people want to hear is Gabriel’s “Biko” we all know anti-apartheid is a huge lie cause Africa is worse then ever under black rule. Plus only chavs and poofs want to hear Sting’s “Desert Rose” for the thousandth time.

Also, Sting, apologise to your band members from Police. You’re not the genius you think you are your solo work is also shite. I hope the Rock Paper Scissors Tour is a huge failure and you both fall off the stage!

27 thoughts on “Peter Gabriel and Sting”