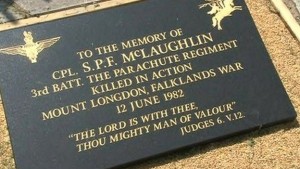 In honour of Cpl Stewart McLaughlin, and the 1,000 Para’s who marched in London yesterday, I’m nominating the Ministry of Defence, and the Government, for an intergalactic cunting.

For those who don’t know, Cpl McLaughlin was an NCO with B Company 3 Para. He was killed in the Battle of Mount Longdon, during the Falklands war, but not before carrying out several acts of spectacular bravery whilst leading several assaults on the Argentine position, one of which involved him shouting the immortal line, “follow me lads, I’m bulletproof”. His actions provided a much needed morale boost to the men in his company, and they pressed on with their attack. Unfortunately, he was killed later in the battle by artillery fire whilst being helped to an aid station, having been seriously wounded in a mortar attack.

The mortar inflicted wound that Cpl McLaughlin suffered, was received whilst taking part in an attack on Argentine position, that was lead by Sgt Ian McKay of 3 Para. During the attack, Sgt McKay and a private were killed. Sgt McKay was later awarded a posthumous VC.

After the battle, his CO wrote a citation, but due to the fact there was only one typewriter available, and a time imposed for typing up citations, Cpl McLaughlin’s was never typed out and therefore not accepted. In September of 2013, General Sir Hew Pike, who was the commander of 3 Para in the Falklands wrote a new citation that placed Cpl McLaughlin’s actions “firmly in the vicinity of a VC”. That’s right, his actions on that night were so instrumental to his Company that they were considered worthy of our nation’s highest award for valour.

The MOD and the Government, however, disagree. For 33 years successive pen pushing arseholes have continuously refused to even consider ending this injustice, and awarding the medal he not only deserves, but has more than earned. A recent ‘investigation’ has allegedly found that there was no evidence that a citation was even written. The problem is, a number of men who served and fought with Cpl McLaughlin, and witnessed his actions that nigh, have said that nobody from the Army or the MOD has ever spoken to them. That includes his former CO. Basically, the MOD carried out a bullshit investigation that only ever intended to justify their decision to refuse an award, because they didn’t want to admit that they were wrong.

On the 3rd of July 2015, around 1,000 Paras, their families, and supporters marched through London to Downing St, where Cpl McLaughlin’s son delivered a petition to Cameron. I have no doubt that the second Cpl McLaughlin’s son was out the door, posh twat threw the petition in the shredder. He’s spent the past five years destroying our military, why would he give a single fuck about a far better man than Cameron could dream of being, who died whilst serving his country? Likewise, those fat fuckers at the top of the MOD. All THEY care about is themselves. Their main preoccupation is ensuring that they have as big a pension as possible, whilst working out how much expenses money they can get away with fiddling.

None of them have ever done anything remotely deserving of an award, yet the MOD is filled with Sirs, Dames, OBE’s, MBE’s and CBE’s. Not one of those fuckers is fit to lick dog shit from the soles of Cpl McLaughlin’s boots. Yet they have the audacity to refuse to recognise a man who DOES deserve an award. They are cowards. They are scum. They and their ilk are the reason that this country has turned into a shithole. Because they’re the cunts who made it a shithole.

20 thoughts on “The Ministry of Defence”