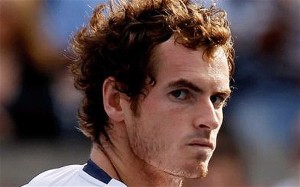 This dour, ugly, sweaty Scottish cunt must rank as the most unlikeable sports person on the planet. The cunt gives off an aura of “Fuck you all” to such a degree, it boggles the mind why any tournament organiser would want the cunt there. If he doesn’t win it’s because some other cunt cheated or he has strained his sphincter when smashing up yet another racket. If he does win it’s because he is a living legend and no one else is fit to even look at him.

The worst thing surrounding the whole carry-on is that the English adopt the Scottish cunt once a year, when he turns up at Wimbledon and proceeds to swear and sweat his way through the entire tedious event.

Fuck off Murray. Stop asking the ball boys and girls to bring you your rancid sweaty towel in between every shot, and at least show some humility to acknowledge that you play a poncy fucking game for a living.