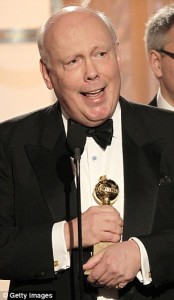 Julian Alexander Kitchener-Fellowes : Pretentious ponce calls himself The Lord Fellowes of West Stafford – God fuck him. Bolted on the wife’s family name (Your Country Needs You) Kitchener after marriage because the filly comes from a long line of genuine high society tossers. Unlike the Fellowes fucker who is strictly other ranks by descent. Yet another actor playing a part gorn to his fucking head although granted they tend to play the other way down from middle class posh background to mockney cunt (Bob Hoskins, Ray Winstone et al)

His Cuntship waddles around with a plum stuck up his arse lifting plot lines from his genuine aristo acquaintances. Cunt goes moist at the thought of real aristos fucking so cobbles up badly written poke a princess stories for pensioners set in an upper class never never land. Downton Abbey? Fellowes you gentry envy cunt!

The tosser affects to speak like a fucking pimp supplying arse to the nobility. As an indigent aristo one knows that the plummier the accent, the faker the cunt. Matter of breeding. Generations of bloodline not to be sold out. Point of honour donchaknow.

Not to say that under the imperitive of necessity one would not enthusiastically grease the arse of the Fellowes fucker in order to hire out parts orf ones estate as a filming location on a strictly cash basis. Quantities orf authentic village idiots, inbred cousins and clapped up slappers supplied at cost as part orf the jolly old package. Should the director chappie require a masterclass on merciless tenant eviction or instruction in the vices and rodgering technique of his masters and betters then happy to oblige. Oh and I am prompted ‘Experienced estate vulture available. Rates negotiable’.