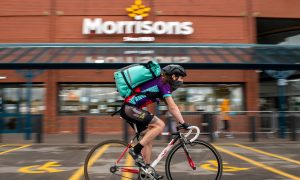 More of an un-cunting than a cunting perhaps, but Deliveroo have finally come to realise the sort of scum who use their services by offering takeaways on finance.

The inbred benefit claimants can now defer payment or pay via installments. What kind of cunt has to pay for a dominoes in installments?

Many people, including Martyn Lewis, are wailing and wringing their hands, but I think it’s fucking hilarious and a move in the right direction. The fucking shame it heaps on these grease-addicted fucktards.

Fuck the underclass, the epsilon semi-morons, the ‘concerned’ of Twitter and Martyn Lewis

Good on Deliveroo for recognising your customers for what they are; feral, penniless, idle, feckless scum.