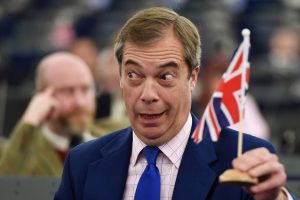 Now I’m the first to admit that I’ve never really been too convinced by ” Sir Nig.”, I always thought there to be something “spivvy” and opportunistic about him. However, to give him his dues,he has stuck to his guns through thick and thin…but is now the time for him to put the National Interest before his own personal hubris?

People need to accept that a “No-Deal” brexit is never going to be allowed to happen. Whatever people may think of Johnson’s deal it’s that or cancel the whole affair under a Lab/Liberal/SNP coalition Govt. which is liable to hold power if the Brexit Party splits the “leave” parties’ vote in marginal constituencies.

Farage seems to be prepared to risk a Labour/Lib/SNP coalition seizing power,cancelling “Brexit” plus allowing Sturgeon to hold another referendum on the future of Scotland….dangerous times indeed.

Farage,if he really is the patriot that he claims to be,must put aside his unobtainable dream of a “No Deal” Brexit and throw his support behind the Tory Party or,if he can’t bring himself to actively support the Tories must at least stand down his candidates in marginal seats. If not,he runs the very real risk of being remembered as the man who handed the levers of power to an extremely dangerous bunch of people.

I used to have a lot of time for Farage. Like him, I desperately want us out of the EU. At the start of the General Election campaign, he said the Brexit Party would not field a candidate in Conservative held constituencies if they entered into a non-aggression pact with the Brexit Party. Boris basically told him to fuck off, and what has he done? He has now withdrawn all Brexit Party candidates from Conservative held seats anyway, thus giving a huge amount of support to a party which is not offering a true Brexit.

I live in an area which has had a Conservative MP since before Jesus was born. However, at the Referendum, we overwhelmingly voted to leave the EU. At the last European Elections we voted for a Brexit Party MEP.

I truly believe a Brexit Party candidate could have given the Tories a run for their money, but I am not now going to get a chance to vote for who I was really looking forward to voting for. As there will be nobody else that I think is worthy of my vote, this will be the first election since I became eligible to vote (well over 30 years) that I will be staying at home that day.

Because of that, I am now firmly of the opinion that Farage is as much of a cunt as the rest of them.

Just been in the phone with Nige, and he pointed out this. https://www.henfieldhub.com/nick-herbert-mp/my-position-on-brexit , challenging him may split the vote in favour of an opposition majority and increase the chance of a poor brexit so he is being left alone. 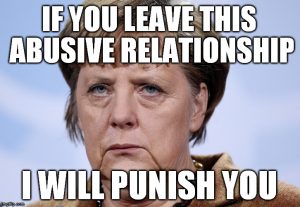 A blue and gold flag-waving cunting please for that festering heap of flyblown filth, Frau Merkel.

Yet another fading star of the EU, who appears to have taken over the bullying today from Irish Pansy, Leo Varadkar. They take it in turns, don’t they?. I suppose piss-artist Juncker is sleeping off his latest piss-up, so he is holding the coats while they all line up to take a swipe. I think it was Tusk’s turn yesterday. A couple of weeks ago it was that little cunt from Luxembourg, who is so forgettable, I doubt many remember his name – I don’t, and can’t be bothered to look it up.

We all know the EU is a corrupt body of charlatan bastards, but just who is supposed to be conducting these negotiations?. Thanks to the “Benn Act” (of gross surrender) they know they only have to play silly-cunts till the end of the month. 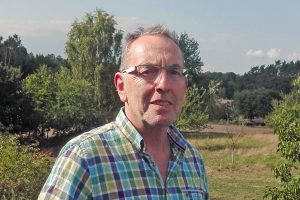 Who the fuck is Iain MacNab I hear you ask?

Iain Macnab proudly flies the Scottish flag outside his home in Brunsmark, where he is the burgermeister – or mayor. He has been elected to the post three times but Brexit means he will not be able to stay in office for much longer.

“The minute Brexit occurs, that’s me,” Mr MacNab said. “That’s the end of my tenure because I am no longer an EU citizen.” He has had that confirmed in writing by the state of Schleswig-Holstein that includes the Lauenburg lakes region of which Brunsmark is part.

The letter states that when the UK leaves the EU, British “people won’t be allowed to hold any office in a local council or local government”.

Unless he becomes a German citizen or secures dual nationality before the 31 October, he will be forced to quit the prestigious office he has held for 12 years. He has a German wife and two children. He says he’s a Scot and proud of it and refuses to renounce that to become German. He says he will move back to Scotland, campaigns for independence and wants Brexit cancelled.

So this why Mr MacNab is a cunt. He’d rather relocate his family to a foreign country than take dual citizenship. Nobody asked him to renounce being Scottish. He’s scoring political points and helping the BBC propaganda machine.

Three cunts for the price of one… 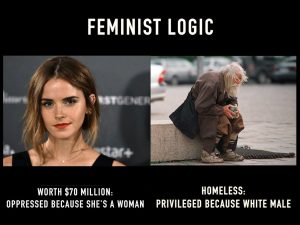 I would like to nominate this doctrine and consign it to the dustbin where it belongs.

There is no patriarchy in the West. Power is money or having back scratchers in high places, both types have been enjoyed by me. Have I ever felt unempowered, abused, owned by men? No.

Fuck off feminists like Jess Phillips, except for the ones in backward A rab countries, who usually get whipped or killed. 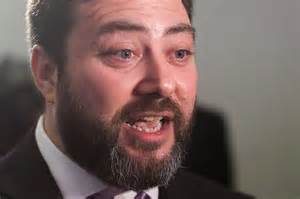 Sargon of Akkad, aka Carl Benjamin, Youtube personality and UKIP MEP candidate, is a cunt.

This is one of those instances where I find myself nominating someone who I hold some affinity or respect for. I follow this guy on YouTube and have done for a few years.

Benjamin is currently an MEP candidate for UKIP in the SouthWest, and is making tabloid headlines right now for his ‘rape’ tweet made three years ago to major cunt Jess Phillips. In context, Benjamin at the time stated to Phillips that ‘I wouldn’t even rape you’, as an edgy joke response to Phillips’ claim she got rape threats on a frequent basis. This comment has recently been dug up by the media, both to denounce UKIP and, where applicable, to give positive traction to Labour.

That tweet itself, to me, is not particularly outrageously offensive, especially in context. Rape jokes are, or were, common with mainstream comedians. And a word must go to the conniving cunt Jess Phillips who at the time, did not express any notable concern at the comment but three years later revealed how it left her “crying in the street”.

However, Benjamin has really fucked up on the following:

The whole debacle has shown why people popular on YouTube rarely translate well in the more conventional forms of media. What works in an online format for his type of audience will only ever translate badly in interviews or press coverage. He has gone about his campaign like a flailing autist and just deliberately antagonised the media into hounding him. I’m not saying he should pander to the media at all but there’s always got to be an element of forethought, especially considering the media influence during elections.

I wanted UKIP to get back to where they were in 2015 as a viable alternative party, one with policies and more grounding than The Brexit Party and one which millions of disillusioned voters could gravitate towards over the whole Brexit issue. Sadly, UKIP seem to be the same shambles as they were when Steven Wolfe was photographed spark-out on the floor with his briefcase.

I agree with Benjamin on much – the damage from feminism, millennial stupidity, the lunacy around diversity, immigration, the EU – but it was a grave mistake for Gerard Batten to blindly believe that Benjamin’s online presence alone would bolster UKIP as an MEP candidate. The cunt should never have been allowed to appear outside of his YouTube channel.

So with heavy heart, Sargon of Akkad – you are something of a cunt, my son.