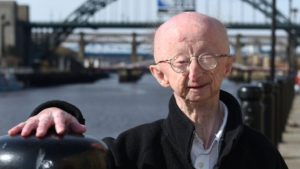 Alan Barnes needs a cunting. For those who’ve forgotten, Barnes is the 68 year old, 4’6″ disabled bloke who got pushed over during a mugging and broke his collar bone. You might remember that a young woman called Katie Cutler was responsible for helping to raise £330,000 for Barnes to buy a house away from the one he was mugged outside of. I saw signs of his cuntishness when he sold that house after a few months because he didn’t like it and moved to Shetland. Well now he’s shown exactly how much of a cunt he really is.

Whilst raising money for Barnes, Cutler accepted and offer from a PR firm to do so work for her for £550 per day. Rather stupidly, instead of keeping some money back to pay the final bill, which came to just over £6,600, she gave every penny to Barnes. I would imagine she’s regretting that decision now, because being unable to pay the firm, she was taken to court and now has a CCJ against her. She still can’t pay and is facing action from bailiffs.

Now, you might think that Barnes would consider it his moral duty to step in and help the woman who made him richer than he otherwise would have been had he not been mugged. He’s offered a tenner. TEN FUCKING QUID. Apparently, he doesn’t want to look like he’s showing off. He also doesn’t want people sending him begging letters. That in itself is fair enough, and to be equally fair, Katie hasn’t actually asked for help. BUT, she isn’t some fucking hard luck case asking for ten grand. She’s the REASON he has more money than he could dream of.

It’s not often that I get very angry by something I read in the papers, and when I do, it’s usually caused by terrorists. But this has really made my blood boil. Apart from anything else, it’s because it doesn’t seem to occurred to him that this would be the perfect opportunity to show his gratitude, and give something back to the woman who showed him such kindness. He didn’t ask for her to do this, she did it because she’s a good, kind woman. He didn’t have to accept the money, he could just as easily have said ‘thanks very much, but I’d prefer it if you gave it to charity’.

He didn’t do that though. The pound signs burned into his greedy little eyes, and he took the money. That put him in her debt. And the fact that it doesn’t trouble his little mind that he does actually owe this woman for the kindness, and secure financial position that she put him in, shows what an ignorant, greedy little cunt Alan Barnes is.