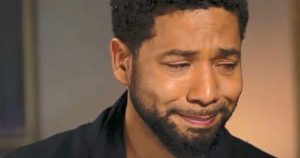 Jussie Smollett and his Supporters

This cunt is desperately playing the victim card like I’ve never seen and why not? He has his dumb fuck fellow cunts supporting him for no other reason than his skin color and choice of cock holster.

This turd pusher has been fully exposed for the criminally racist cunt he is. His flailing and screeching in spite of his gig being up is bad enough, but now fellow cunts are coming out of the woodpile to lend open support. Most people would slink away in shame but this arrogant race baiter only doubles down. He expects the world to feel sorry for him because somehow his staged hate crime and being convicted for it make him a victim of racism.
The mental gymnastics are breathtaking!

To support this cunt is next-level cuntery. The blind reaction to scream “Racism!!” with every shred of evidence to the contrary tells us that there is NOT a desire to do away with racism. It’s too valuable and powerful to ever be done with it.

So we should never try to appease any of these cunts because there is no making them happy. Racism will never be allowed to die and false claims will always be used to threaten, shake down, cancel, or neutralize guilt.

On the good side, even casual observers will see this for what it is and hopefully the race card will loose it’s effectiveness.
May his career never recover and he reap every appropriate consequence for his horrible life choices.

I hope every appearance he makes will result in tanked ratings so he will be avoided like the plague.

FFS his sentence wasn’t any where near what it should be and probably because of fear of the accusation of “Raaaacism!!”

Fuck this unrepentant pillow biter and all who come to his defense!

43 thoughts on “Jussie Smollett [2] and Supporters”