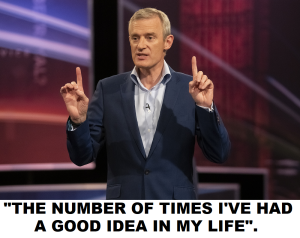 Jeremy Vine is a cunt, we recently switched to radio2 in work due to all the noise and signal problems with DAB.

So with radio 2 you get this cunt Jeremy Vine, sometimes it’s interesting but more often than not its just verbal diariouh, cunt boy is talking about the cunt cyclists getting killed by trucks, where they have ridden up the side of a truck in traffic on the inside (these fuckers do this all the time), anyway JV says it’s not the fault of the fuck monkey cyclists, it’s the fault of the drivers and all vehicles with any blind spot should be taken off the road.
This means lorries, buses, bin lorries, vans, certain cars, ambulances, police, fire engines.

So Jeremy you thick cunt 6 hours of that and the whole country will gind to a halt you stupid fuck, bellends like this clown are exactly the twats who slide down the sides of lorries and put themselves in harms was. Wouldn’t it be better for common sense to be activated and even if there isn’t a danger sign, the brain should tell you it’s not a good idea.
JV goes on to say cyclists are more important than other road users, it would be interesting to see how new push bikes are delivered to bike shops without the blind spot infested cyclist killer van.

So JV is a cunt who if he believes his own bullshit must be on fucking drugs, what an absolute cunt…

For your pleasure cunters, everyones favorite cunt on radio 2 Jeremy Vine. This dozy bellend was too posh to ride on the road like other cunts on two wheels. Instead Jeremy decides he was going to ride on grass, hit a divot and had to be rushed to hospital. Fortunately Jeremy hit his head and blacked his eye.

A great pity the injuries were not more severe and we could have a rest from the twat.