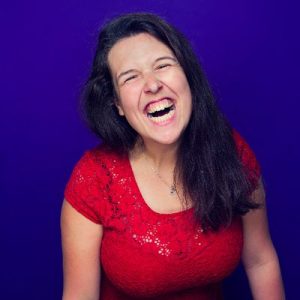 Another BBC inspired cunting please for this unbelievable “comedian”. This woman is described by the Corporation as “lesbian, disabled and Northern” (no wonder her current series is called “Box Ticker”

Hear her in inaction here:

How can the BBC be so patronising, and Ms Jones so uncritical and easily led to broadcast?. She sounds (and I know it is not her fault, due to her disability), like a five year old child with the voice up and down like a whores drawers. She makes little sense, but I doubt she would do anyway even if she were able bodied. She sounds like Zara Sultana out on the piss.

I read she has appeared on “Question Time”. The BBC should be prosecuted for cruelty, both ti her, and to the audience who pay to be “entertained” by this poor girl who, frankly, should be seen and NOT heard.

61 thoughts on “Rosie Jones – A So Called Comic”