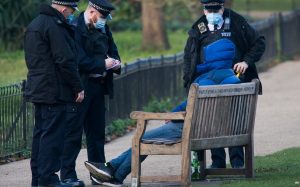 The police and how far they have fallen.

Manchester force not fit for purpose. Middle class idiots of XR and the ridiculous Insulate Britain not only indulged but aided and abetted.

And the Met. Where to start?
The killing of a Brazilian commuter. Who was in command of this botched op I wonder?
Knife crime and general violence in London off the scale. Daily. We now have cunts on motorbikes targeting cyclists – no descriptions given of the perpetrators though. I wonder why?

The climate of misogyny and bluster which effectively encouraged the vile cunt who murdered Sarah Everard.

Anti Semitic and pro Jihadi sentiments from a serving officer effectively unpunished.
Dick continuing to obfuscate and delay yet another investigation into the killing of Daniel Morgan, which was corruption related.

Dear god, are we to believe that Dick is the best we have out of the whole UK police ‘service’ as they style themselves?

God help the poor ordinary fuckers the Met is alleged to serve.

The cops. No longer fit for purpose.
(Too many links which will blow a fucking site fuse.)

I can’t second this enough. Dick was the Head of Terrorist Response (or whatever) when they put 8 or 9 bullets in the head of an innocent.

And the police (Apols admins – I lived in London at the time so remember the stories but cannot find links) said he was an illegal and was a cocaine user in order to deflect the news. (9 FUCKING BULLETS. You should be aiming south-east off the coast, you cunts.

‘Keir Starmer, Director of Public Prosecutions, approved a decision not to prosecute any police over the shooting.’

‘Jean Charles’s cousin Vivian Figuierdo said “We are in shock and cannot understand how the deliberate killing of an innocent man and an attempt by the Metropolitan police to cover it up does not result in a criminal offence.’

And additional support from Cuntfinder General

If i may add to CC’s excellent nomination.

A performance table from the Gruniad: