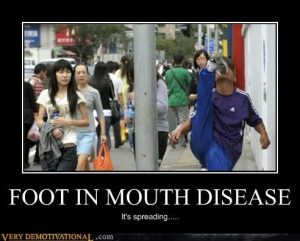 20th Anniversary of the F&M Crisis

My piss is boiling at this one, the BBC is planning on commemorating the Anniversary of the announcement of the Foot and mouth crisis on the 20th February, I remember arriving back in Blighty on the 6th March 2001 after being turfed out of my home in Rhodesia, being picked up from Heathrow by my cousin and making the journey back to Pembrokeshire, we reached Gloucestershire and I remember seeing the massive funeral pyres from the motorway as we drove through the night, now I’m not an emotional man but I actually cried (and I’m not ashamed to say it) at the sight I witnessed, I saw people’s pride and joy go up in flames, people say “they had compensation” or “farmers don’t care as long as they have the money” or even worse “they get slaughtered anyway”, people who say that are utter fucking CUNTS!!!!, B liar and his cohorts deliberately destroyed lives to keep their EU “friends” happy, this was B liar’s first taste of mass destruction and he fucking loved it, so much so he moved his destructive streak to include people later in his premiership, we never had F&M in Pembrokeshire and I’m entirely grateful for that, so as this grim anniversary approaches, I shall remember the first act of hate B liar instigated against Britain and why the fucker should be strung up from the biggest sheep Holocaust the world has ever seen, quite prophetic that today we’re “tackling” a virus with an extremely high recovery rate (like FMD) but destroying livelihoods on a grander scale this time, notice how B liar is never far away when tragedy strikes, or the BBC, fuck them all!!!!

(We appreciate the nom, but we can’t be arsed to proof-read and break it into paragraphs – DA)