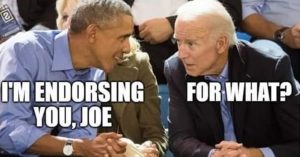 ? Don’t wanna be an American idiot ?
Joe Biden…….the next President of the United States!!

Poor Joe. Well into the early stages of Alzheimer’s, doesn’t know where he is half the time but finds himself as a puppet on a string for the communists who have infiltrated the Democrats.

You’d think his family would put a stop to his humiliation but are you going to deny him the opportunity to be President?…….tough call. They are keeping him away from hostile media (not much of that) on the grounds of his age and vulnerability to Corbyn19.

The Yank media are using that excuse, and many others, to suggest that there should not be the usual tv debates with his opponent. They know very well he is not in a fit mental state to handle that. Tango is a ruthless cunt and will fucking destroy him.

The Democrats must be in a right state if poor old Joe is the best they can come up with. Mind you, the last time they put up one of the most unpopular cunts in the country so don’t ask me for fucks sake.

I can’t do links and shit but there’s a stand up routine by Robin Williams where he rips the piss out of “rambling Joe Biden”. That was 2009!!.

If Robin were still alive he’d be “cancelled” ………. obviously.