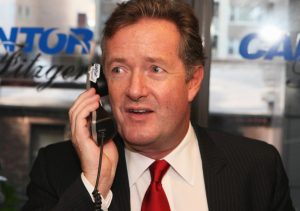 Hacking? I dont know what you are talking about…

A nomination for Piers ‘I’m a hysterical 5 year old princess’ Morgan. Morgan interviewed former New York Mayor and lawyer to Donald Trump, Rudolph Giuliani. And what a fiery affair it was. The row began over Trump’s response to the killing of George Floyd, devolved into insults of ratings and became an argument over levels of how insane everyone is and ended with Morgan mis-hearing what thought to be a swear word, but clearly wasn’t.

RG “I remember the mistakes you made and I remember how you stuffed* up!”

PM “You’ve come on here, you’ve been rude and abusive, you sound unhinged, you’ve been using profanity. And you were somebody I used to admire Rudy.”

RG “I haven’t used profanity, tell me the profanity that I have used. You lie about that too!”

For once, I actually watched the interview, and it certainly sounds to me like Rudy said ‘stuffed’ rather ‘fucked’ which is what Morgan clearly thought was said. Morgan needs to re-watch the interview with his producer and co presenter, and when her realises he got it wrong, he needs to apologise. Of course, we all know that Morgan doesn’t do apologies. He has neither the decency nor the honour.

Piers Morgan, once again, is deserving of a nomination. As we all know, BLM UK and ANTIFA have been “protesting” about the wrongful death of a black American man whom none of them have ever met, and don’t really care about. And of course, with ANTIFA being involved, these so called protests haven’t exactly been peaceful.

Anyway, throughout the Kung Flu crisis, Morgan has behaved like a spoilt four year old princess, getting all hysterical and righteously indignant whenever someone broke the rules or stood less than two metres away from other people. On the 3rd June, he called Labour MP Barry Gardiner “reckless and irresponsible” for joining the BLM protest outside parliament. However, the very next day, Morgan’s son joined another BLM protest, and Morgan tweeted to his demented followers that he was proud of his son for protesting, apparently, Morgan Jr assured his dad that he’d followed social distancing as much as possible. Considering how many left wing scum have been showing up to these things, I’m confident that Morgan Jr was NOT in any way keeping his distance.

When Julia Hartley-Brewer called him out on his hypocrisy, Morgan replied, “What law did he break, Julia? Supermarkets are ‘mass gatherings’ – have you been to one lately? He wore a mask & gloves, met up with under 6 friends, & tried hard to socially distance – because he wanted to protest against racial injustice. So yes, damn right I’m proud of him”.

What did law did he break? Interesting question Piers. What law any of the people you’ve been hysterically calling out and insulting broken? And yes, I have been to a supermarket recently. They are NOT mass gatherings. Apart from some of them having long queues outside, where social distancing has been enforced, they haven’t been even slightly packed. That’s because the staff control how many go in at any given time. You’re certainly not shoulder to shoulder. And going to a supermarket is a necessity. Attending a protest/riot, for over the death of a man that none of the attendees have met, and who probably don’t know his name or what he looks like, is not a necessity.

So, as well as being a liar and insider trader, Morgan is also a raging hypocrite. Fuck you Morgan. And fuck your dipshit son.