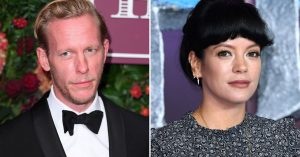 Early contender for Cunt of the Year, Lily Allen. Holy Jesus and the Apostles. How is it possible for someone to be stupid? The showbiz equivalent of Diane Abbott? I don’t have an answer for that, but Allen demonstrates that some people can manage to function with an intelligence quotient that starts with a minus.

After Laurence Fox’s outstandingly brilliant performance on QT, Allen took to the Twatterverse to air her view on that matter. And it’s a masterclass in idiotic hypocrisy. She wrote;

“Sick to death of luvvies like a Lawrence Fox going on TV and forcing their opinions on everybody else, when he’ll never have to deal with what normal people have to deal with in his gated community. BBC should be ashamed, this is not what we pay our TV licences for (sic)

“Stick to acting mate. Instead of ranting about things you know anything about”.

I know, right? Let’s start at the beginning. Question Time panellists are on there to express their opinion on various issues that the panel are asked about. So, on that score, he wasn’t forcing his opinion on anyone. I knew, as I suspect most other viewers knew, that I had the option to change the channel and in any case, Allen herself is the Queen of forcing her opinions on others, being a prolific Twatter contributor.

“He’ll never have to deal with what normal people have to deal with in his gated community”. Wow. Just, wow! Someone remind me, who is Lily’s dad? Oh yes, Keith Allen, the famous bricklayer. I know, I know, he’s an actor. Allegedly. Some even claim that he’s a comedian. What the fuck does a rich girl, born into a life of wealth and privilege, know about what “real people” have to deal with? NOTHING, that’s what. All her life, she has been handed everything she’s ever wanted, including a career in the music industry. Well, do you really think she’d have so many singles and albums if she’d been from a council estate? Not without a lot of hard graft. Ok, Laurence himself is a part of the Fox acting dynasty, but he doesn’t pretend to understand the working class, as Lily often does. He certainly doesn’t patronise, or call us racist because we dared to vote to leave the EU. Lily does.

“Stick to acting mate. Instead of ranting about things you know anything about”. Seriously? Allen rants about thing she knows fuck all about, such as ‘real people’ on an almost daily basis. Yet she feels she’s entirely justified in telling someone else to shut the fuck up. Lily, how about YOU stick to music? You literally know nothing about the vast majority of subjects you spout off on. You have no right to rant against someone you disagree with. Especially when the tweet you put out actually applies more to you. What a cunt.

Happily, Laurence has not bended the knee either to Allen, or the many other SJW’s who have piled on him. In fact, he’s actually doubled down on them and told them to keep the abuse coming, which is something I imagine is a new experience for them. They’re used to having someone back down. And even better, Laurence’s response to Allen’s tweet has apparently led her to block him. I’d call that a result.