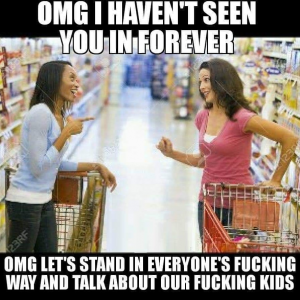 Fucking cunts to a man (and woman, and all those gender fuckwits in-between for that matter!) You’ll find these cunts in shops, supermarkets, cinemas, restaurants, high streets, car parks… in fact you’ll find these bastards almost anywhere in the public domain.

They’re easy to spot because they just dawdle, shuffle, or just stand in the middle of whatever, and generally get in the way of everyone else who are trying to get from Place A to Place B as quickly as possible.

But supermarket dawdlers are old hat now. Ever since the invention of the smartphone, we now have a new breed of dawdling, daydreaming cunt that you’ll find on the high street. Glued to their fucking phones, they’re totally oblivious to fellow pedestrians, and don’t even bother to look up before crossing a busy fucking road, shuffling along while they fuck about with their phones.

What the fuck is wrong with these cunts? Why can’t they get a move on like everyone else and get the fuck out of the way?

Sick to death of getting stuck behind these bastards (young or old, they’re all dawdling cunts). If I had my way I’d set the dogs on the bastards: that’ll make them move!