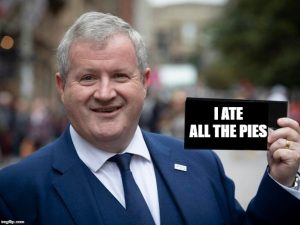 Oh dear, oh dear. I see that the SNP’s Westminster leader has opened his cavernous cakehole and let his enormous belly rumble yet again. The gigantosaurus gobshite has accused a broadcaster of ‘silencing the case for remaining in the EU’ after the SNP lost a High Court judgement concerning participation in a televised debate between BoJo and ‘Catweazle’ Corbyn.

In spite of the fact that every other party leader is also excluded, the whinging whale just couldn’t wait to play the SNP’s grumble, grudge and grievance card. ‘The result of the decision is to discriminate against Scottish voters, and to effectively treat them as second class citizens’, griped the whining windbag, as he played his broken record yet again.

As if being Chairman of the Lard Council of Great Britain wasn’t a big enough weight to labour under, the fat fuck has now inherited the mantle of his erstwhile leader, Alex ‘Oldest Swinger in Town’ Salmond. Yes, Bigbelly Blackford is now officially the most boring, pompous fart in Britain.

You’ve almost got to feel sorry for someone who’s such a monumental cunt.