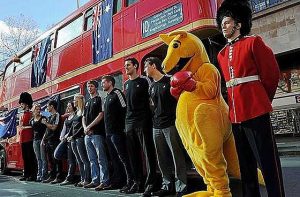 Nobody invited these annoying cunts here, atrocious accents, brash behaviour, loud as fuck, endless consumption of alcohol and most likely Vegan. And did they tell you they’re from Australia? Don’t worry, you’ll know straight away, because they just can’t fucking wait to tell you, whilst draped in the national flag, at the top of their voice, pissed as a fart.

Overpriced and overrated areas in South London such as Clapham and Tootling have been descended upon by those from Down Under, making it even more unbearable to walk the streets, as if it wasn’t enough being crammed full of middle-class mummies and sand demons, respectively. They’ll drain the local corner shop or Tesco Metro dry of booze, becoming insanely drunk before heading off to a rugby game on the tube, or simply fucking around on Clapham Common, annoying everyone who has the misfortune of being near them – and that’s just on a weekday. CUNTS.

51 thoughts on “Australians living in London”