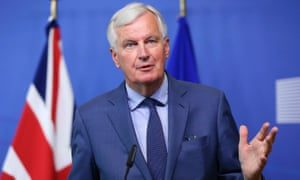 Michel Barnier is a cunt of the highest order.

This French cunt was born into wealth and privilege. He was educated in the French private sector and graduated from an institution that has supplied the upper echelons ( sorry to use an adapted French cunt word – blame King Harold for losing) of French government and business since it was established in the early 19th Century. He has never had a ‘proper’ job as my mum would have said. Nothing new there then – no different to our domestic pig fuckers who went to Eton\Harrow and Oxford\Cambridge and now, or who did, sit in the asylum at Westminster.

But this French cunt has chosen to identify nostalgia, imputed with derogatory meaning, as a reason 17.5 million British people voted ‘Leave’.

Well yes, of course it’s nostalgia. I remember attending one of the best grammar schools in Birmingham even though I lived on a council estate and had Irish parents (you snowflake cunts know nothing about prejudice). I was there by merit not because daddy had deep pockets. I learned Greek and Latin, very useful at the off-licence when it was my turn to buy the packet of 5 Woodbines to share ( yes – share you millenniall bastards) with my mates. The majority of teachers served in one of the armed forces during the war. It had left scars, both physical and mental, on some of them. They wore gowns, the staffroom was a fog of cigarette smoke and Friday was the best day of the week because they all went to the pub for a liquid lunch which was followed by a tranquil afternoon. I once ran a 3 mile cross country race in bare feet in the snow because I had forgotten my pumps. That was the kind of enduring lesson that was taught.

Dear Jesus – can you imagine the Ofsted report? But I owe these good men a debt of gratitude an infinite lifespan would not be long enough to repay. They were patriots and proud of their country. They were prepared to fight for their freedom. They taught that negotiation with bullies was futile and they taught us never, ever trust the French. Self-serving cowards all. So shove my nostalgia up your arse Barnier and if ever I meet you I will tear you a new one with bare hands. They are as hard as my feet. Cunt