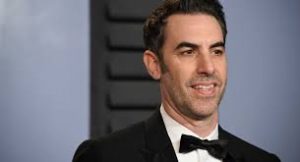 Ohh, Sacha Baron Cohen! Disappointing. You must have the cold sweat of ‘no inspiration’ trickling off your forehead to be now scraping the barrel of mirth so badly.

Cohen’s new comedy is called “Who Is America?” and, erm, it’s not very good. It has several characters (a bald leftie and an Israeli ex-soldier seem to dominate) who are acted and disguised well but alas, it seems the tap of comedy has run dry. He now languishes in the cemetery of Comedians: Making jokes about Trump.

Really? Are things that bad? You made Ali G, a genuinely funny creation with its finger clearly on the pulse of society. You’ve been edgy, puerile, dodgy, and offensive. You’ve made films like The Brothers Grimsby and The Dictator. It was even admirable when they weren’t so great (Bruno).

Borat was ace; filthy, vulgar, offensive and occasionally hilarious. Even the outtakes and media interviews were good like the press conference at Melbourne, Australia where he greeted the journalists (in character) with, “Good evening Convicts and Prostitutes!”

We need to poke fun at everything, we need to take the piss, especially out of politicians. However… this? From you? Laborious, dull clichés about racism and guns. This is weak and has the odour of desperation about it.