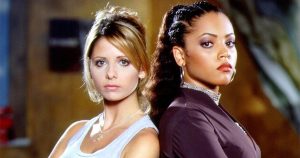 I feel another cunting is due for the pc brigade who plan tv shows. Having read this afternoon that there is to be a reboot of Buffy the vampire slayer, with a black woman playing the lead role. When does this madness end? Much like the question posed another post, can we expect remakes of films with black leads to be made with white actors or a Bridget Jones ( the only female film that came mind) remake titled Brad Jones with Colin Firth as the lead.

Blackwashing is afoot my fellow cunters. How far will it go?