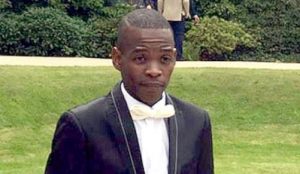 Ntokozo Qwabe, the nasty little cunt who caused a commotion a few months ago, by starting a protest at Oriel College demanding the removal of a statue of Cecil Rhodes. And again a few months later, when he refused to tip a waitress in a South African restaurant because she was white. My contempt for this distasteful little wanker is such that I cut and pasted his name from the DM article, rather than remember it, or write it down.

Anyway, little Ntokozo has been at it again. This time, he led a protest at Cape Town University. It doesn’t say what the protest was about, probably the lack of black milk in the Uni’s cafeteria. He and his arsehole followers disrupted a law lecture and, when filmed on a camera phone by a white student, was seen to knock the phone from the student’s hand with a stick. Now I’m not a hard man, but if he’d done that to me, he’d be needing the services of the world’s finest neurologist. And a proctologist to retrieve the stick. He accused his victim of being guilty of “white apartheid colonial entitlement”.

This little shit needs to be reigned in, right now. He’s not simply racist, his hatred of whites WILL one day see this pile of festering donkey bollocks go on to kill a white person. Or at the very least, inspire some brain dead cretin to kill a white person. His hypocrisy is fucking unbelievable. He doesn’t need a beating, he needs a bullet to the head, before someone innocent dies.