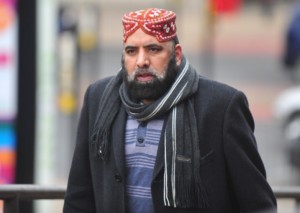 I’d like to cunt Mohammed Khubaib – guilty of sex offences on little girls.

He raped the 14-year-old girl in August 2007 by forcing her to perform oral sex on him after she was given alcohol and then “rewarded” with £5, the court heard. He has have also been convicted of no less than nine trafficking offences in relation to under-age girls who you were deliberately plying with vodka so that you could take advantage of them, knowing they “craved vodka” so you could exploit them sexually. says Judge Peter Rook.

Hold a sec. Mr Rook but since when do little girls crave vodka? More proof that these judges are nonces as well, the shit some of these judges say is unbelievable “His conviction brings the total number of people to be convicted under Operation Erle to 10, of which five are of Pakistani origin.” And there you have it, Islamic cunts love abusing children but don’t worry, Allah and Mohammad says its perfectly fine and normal behavior.