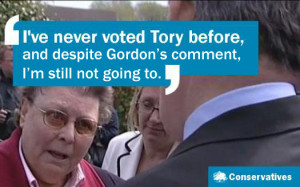 Gillian Duffy, as you’ll recall, is the woman who made a perfectly reasonable comment about people being concerned about the level of immigration, only to have Brown called her a “bigoted woman”.

I’ve often said that voters who vote for a particular party not because they agree with its policies, but because their parents and grandparents voted for them, are as thick as elephant shit. Duffy is living proof of this. Because on being told what Brown had called her, she threw her voting card in the bin. A few hours later, she retrieved said voting card and, when the day came, the brainless bitch voted Labour.

She didn’t vote for them because she forgave Brown and agree with his policies. She voted Labour because her parents were lifelong arseho….err….Labour supporters, and it’s what’s her dad would have wanted. Her dad had been dead for years. He wouldn’t have given a fuck. But like all bovine fuckwits, she just couldn’t bring herself to vote for another party, even though the leader of Labour had insulted her. And she did it, because her parents would not have approved.