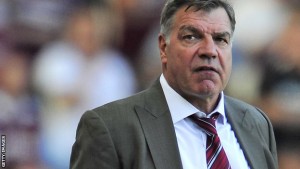 Sam Allardyce is a cunt.

Now I am more than a little frustrated at how Man United are playing right now (mostly shite!), but I have seen far worse (Dave Sexton and 86-89 Fergie, for a start!). But for Fat Sam to moan about United using long ball tactics?! When it comes to exciting and attacking football, Allardyce is hardly Cesar Luis Menotti, Rinus Michels or Tommy Docherty himself.

So fuck off, Sam!