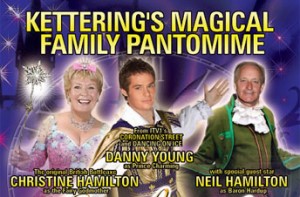 That ghastly season is upon us. Theatres and Civic Centres up and down the land jack up their prices to fleece the punters taking part in the deadly ritual of the Pantomime Season featuring crap comics, fake celebrities and arsehole actors making their only appearances of the year. A poof’s parade of tacky costumes, apalling acting, excrable scripts and shite sets wallowing in an effluent of exhorbitant merchandise.

Interesting season this year. So many of the usual suspects are either banged up, awaiting trial or under investigation. Now known as the ‘Paedomime Season’ in the business. Jim Davidson as Buttons, Russell Grant as Widow Wanky, Mathew Kelly as Captain Hook – “Now then children, is that a paedo behind me – Oh no it is’nt!…Fuck…Oh yes it is!”

I’ll be buggered if I know where theatres keep digging up ‘names’ like the Chuckle Brothers from (and why are those geriatric cunts never prosecuted under the Trades Description Act?). Have to set up me pet vulture Gristle as an agent to sniff ‘em out.

You may have thought many old luvvy cunts were long dead but if they are not queing for the Dead Cunt Pool then they are sure to be in a panto near you.

( Sorry, Limply old man – couldn’t resist using a picture of the appalling Hamilton cunts! After all, you forgot to include publicity hungry disgraced ex-politicians. )