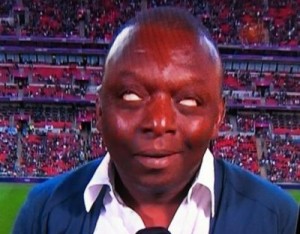 Can you believe Garth Crooks hasn’t been cunted before?

The arse-licking, knows fuck all but thinks he does, black version of Kermit the frog cunt. I despise this dickhead even more than Adrian Chiles!

He appears not only totally unaware of how fucking ridiculous he is but also to be under the mistaken impression that he is an ‘expert’.

Someone should just tell him ‘Look Garth, you’ve had a good run, made a shed load out of talking shit and being black, now be a good chap, STFU and piss off back to Jamaica, and take Funkazi (wife) with you.

He was top scorer at Stoke on his debut season though. 6. In a fucking year. I shit you not.