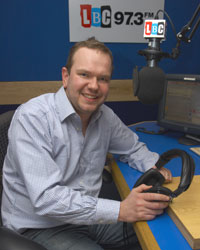 Nobody likes the sound of this pontificating obnoxious weed of a cunt as much as he himself. The ugly gnome faced cunt fawns at the feet of every ethnic caller regardless of how stupid they sound or how redundant their point might be, yet the pretentious fuck can’t wait to pour shit on the concerns or opinions of indigenous Brits – particularly with regard to immigration or the EU.

This know-all cunt thinks he’s an intellectual giant, but he is nothing more than a deluded libtard bully who verbals anyone not in agreement with his own world view. In fact, this cunt is so far up his own arse that his enormous plate-sized cunt of a forehead manages to completely disappear several times a day.

Ethnic caller : “it not fair, racism, racism, religion of peace, racism, it’s not fair”
O’Brien : “I know mate, it’s terrible… Please continue for another 5 mins, I’ll only interrupt to praise you and crawl at your feet”

White van man : “all I’m sayin is that we need to secure the borders and introduce a tighter immigration system like Australia” (caller abruptly cut short)
O’Brien “But why? Are you a racist? You need to take a look at yourself, mate. Immigration is great, why are you so full of hate? Answer the question…. Answer the question… (hangs up on caller) There we have it listeners another irrational UKIP voter”