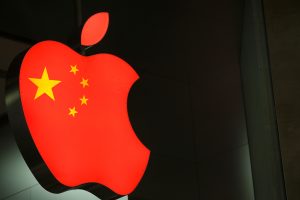 There is no denying Apple have produced some very innovative products over the last 40+ years, coupled with some sleek designs and good quality craftsmanship. It is no wonder many people prefer Apple products over most of its competitors. Hell, I even cut my teeth on programming and IT engineering after buying a 2nd hand Lisa and original Macintosh in 1992 (both produced way back in 1982, and cost thousands even back then!)

However, quality doesn’t come cheap, and so it comes as no surprise that everything these cunts sell is at a super-premium price. Even 2nd hand/refurbished kit can still command eye watering prices for those wanting to try Apple but don’t have access to a bank loan to buy one from new!

And then of course there’s the questionable ethics behind the manufacture and assembly of their products. They source components for manufacture from many places around the world including Japan, Switzerland, Poland, the UK, the US and of course China/Taiwan.

The assembly process is mostly carried out in China and Taiwan. Places of cheap labour, unethical working practices, and currently a big friend of Russia over the Ukraine conflict.

To its credit Apple has stopped sales of its products and services into Russia, but at time of writing hasn’t done anything to piss off the Chinese, probably because if it shut down its factories it would massively hit sales growth and of course profits.

Another annoyance with Apple is that even though its products are well made and have a very high quality assurance threshold, when things go wrong and your device is out of warranty you’re faced with one hell of a bill if you want it repaired by an authorised Apple Service Provider (ASP).

For example, up until around 2015 most Apple laptops and desktops had either standard SATA drives or solid state that were portable and easy to replace. But with the advent of the T2 security chip integrated into the System Management Console on some of their devices, Apple decided to increase security further by soldering the SSDs to the logic board and encrypting it, which means they cannot be swapped out, and neither can they be cloned or backed up/restored remotely should the device fail to power up and you don’t have iCloud or Time Machine enabled.

Another example is that if you have a swollen battery, an ASP probably won’t replace the battery but will replace the entire dependent components as well. In other words they will swap out the battery, keyboard, top case, track bar and anything else related to the battery. You end up paying not only for a new battery but new components that replaced perfectly good working ones.

Therefore it comes as no surprise that Apple is one of the richest most profitable companies on the planet. And yet ethically they are complete cunts, and their cavalier attitude towards their customers is equally cuntish.

And on a slightly different Apple note, here’s one from Ruff Tuff Creampuff

Apple Together are cunts.

According to this bunch of workshy wokies, being asked to get back to the office after “working” from home during the pandemic is deemed racist, sexist and ageist.

probably transphobic too. I’ll take that as a given.