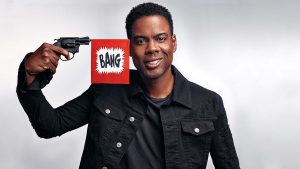 Now I know what you are thinking – how is this guy a cunt for provoking the jug-eared bisexual one into giving him a slap? It’s not because he made an offensive joke about his missuses illness. It’s not even because he is a black comedian who only promotes black humour. Nor is he a cunt for his piss poor performance in Lethal Weapon 4.

No, he is a cunt because he had a chance to prosecute Mr Smith and decided to choose the brotherhood over the law. He is a fucking hypocrite of the highest order.

Can you image if Johnny Depp was nominated and knocked him out with a haymaker for making jokes about him being an alleged wife beater? Irrespective of whether Mr Rock, in this instance, was being very funny, being bang on the money or exercising his freedom of speech, I guarantee Johnny Depp would have been in handcuffs in minutes and the woke brigade would have thrown the book at him. And of course, the Oscar panel would remove any award and ban him for life.

But no. Chris Cunt didn’t even bother to defend the last bastion of free speech by taking Will Smith to the cleaners and instead zipped it.

Cunters – it’s over to you.

Nominated by: Birdman of Cuntytraz