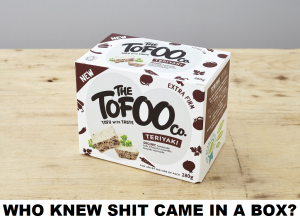 When you thought TV could not sink any lower than “Naked Attraction” or Rylan Clark, something more repulsive than ever appears that makes all decent people want to vomit uncontrollably, while around at Mr Davies’ he was watching Naked Attraction (fuck knows why), the adverts come on and what I saw was an advert for something called Toofoo, which I think is some kind of food freaks and subversive types eat, this fucking creature, I’m not sure what it was but Mr Davies who’s in his 80s shouted out “KILL IT WITH FIRE”, I would not recommend seeing the advert, it’s fucking scarred me for the rest of my life, I now fear a moustached, half caste tranny in a blonde wig will climb through my bedroom window to infect me with the AIDS, any cunt who likes this advert should be fucking sectioned immediately!!!

The Ad – Watch at your own risk!

(With no links provided and a spelling of “Toofoo”, I had to guess what you meant. Hope I guessed right – NA)

I have to second the above nomination, that advert is just wrong. Though, it might be worth including this point: why do our adverts, for anything, now include gays, lesbians, blacks, muslims, and such? Cant even have an adver for BLEACH without a badly-dubbed-over black or paki guy these days. Even the fucking Schofield adverts are better, and thats saying something.