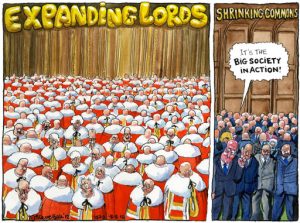 The House of Lords is due another nomination. With a few exceptions, the House of Lords is filled with a bunch of political lightweights, has beens and never weres, along with morons, deviants and lickspittles, put there by various party leaders, because the one thing they could be counted on to do right, was obey the orders of their master. Most of them rarely spend the whole day there, yet they feel they deserve the £300 per day they receive, just for signing in. They simply turn up, sign in, and then fuck off again. They also get to claim expenses. And not one of these alleged Lords and Ladies has been elected to their current position. As far as the House of Lords is concerned, democracy does not apply to them, for they have a God given right to sit in the upper chamber.

Not one of those bloated, thieving, self-important cunts has a clue what the working class has to go through on a daily basis, and they I dare say they wouldn’t give a fuck if they did. Their biggest flaw, is that frequently go against the will of the British people, wrongly believing that they know better than us what’s best for the country. And they do that whilst contemptuously claiming their daily allowance, plus expenses, which comes from the pockets of us, the British taxpayer.

No issue proves their contempt for the average British citizen than Brexit. Time and again, these so called ‘nobles’ have voted against the wishes of the British people with regards to our leaving the EU. They seem to think the issue of EU membership is far to important to allow us plebs to have a say. They are wrong. Our membership of the EU is an issue that is far too important to be left in the hands of our politicians, especially unelected politicians like the Lords. And most especially since the vast of our politicians are in favour of continuing to kiss the EU’s arse, whilst handing over billions of pounds of taxpayers money.

Their latest act of treason was to vote in favour of the UK staying in the Customs Union, something that we, the British people specifically voted against when we voted to leave the EU two years ago. This a blatant kick in democracy’s bollocks and, quite naturally, has provoked enormous anger among us plebs. Numerous PM’s have promised to reform the House of Lords, but to date, not one of them has even attempted it. Now, there is a petition to force the issue, which at the time of my typing this, has over 106,000 signatures. I’m not naïve enough to believe that reform will actually happen, especially with May the Meek as our current PM, but at those ignorant fuckers in the Commons will have to debate it.

Parliament in general is in desperate need of reform. Too many of our political class have either forgotten, or are wilfully ignoring the fact, that THEY work for US, not vice versa. They swore an oath to represent the wishes of the British people, but they’re not doing that. The vast majority of our MP’s and Lords are in it for the money, serving the people they swore to represent is now something to be ignored. And since they’re not doing the job they swore to do, they have a moral obligation to quit, and make way for someone who WILL do the job. They won’t do that though, because they have no morals, and they certainly have no honour.

Since much needed reform is something we will never see, and considering voting makes fuck all difference, I’m rapidly coming to the conclusion that the UK is desperately in need of a civil war. I know, it sounds ridiculous, but when we have an upper chamber that considers itself to be above the rest of us, and the sole custodians of democracy, then we have to take matters into our own hands, especially when the commons shows no signs of taking the Lords to task.

With some Lords, Heseltine, the Kinnocks, Mandelson, etc, their reason for trying to undermine the democratically expressed will of the people is clear, they have a vested interest. Heseltine owns a number of farms and claims a shedload in subsidies. The Kinnocks, Mandelson and a number of others receive overly generous pensions from the EU. And there is another reason the Lords need to be reformed, these cunts are putting their own financial interests before the British people. If these traitorous, self interested twats succeed in undermining Brexit, I’m quite sure their will be a level of unrest in the UK that has so far been unheard of. And those pricks in Parliament will deserve everything that happens to them.