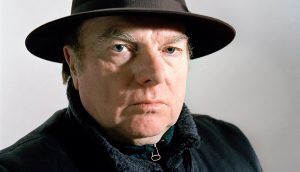 Northern Eyerish bastard cunt from a mangled race orf bastard cunts has a new album oit called Versatile. Only thing versatile about the cunt is its arsework. What voice the 72 year old tosser ever had was lorst years ago along with the barnet. Correct, another cunt that performs in a hat. Bastard.

Now retreated to fucking up the Great American Songbook repertoire with a dodgy fake yank accent with rhythm and intonation all over the shop (check oit Chas C). Always the sign of a muso orn the skids. Orf the top orf me old brain box cannot recall a single orf the cunts numbers (sure to be a sad cunt oit there that can) and he must have written fahsounds orf ’em.

Only saving grace aboit the miserable tosser is it’s never got into politics and saving the planet but only doine to the tightness orf its arse. Typical jocko/mick mix. Only spends money orn lawyers to sue neighbours, ex-wives and girl friends. Notorious cunt to try and talk to (what the media term “spikey”) and filthy rich with it.

Typical miser mick so it is.

( Van Morrison? Where I live that’s a grocer’s delivery vehicle )