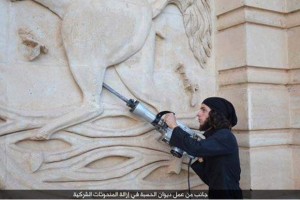 How can I shag this horse? Glorious Allah shows me the way. If I drill a hole for my cock here…

The swivel eyed ISIS wog camel shagging cunts have been hopping around and wanking orf while blowing to smithereens some orf the finest antiquities orf the ancient world, namely the temple orf Baal Shamin and other buildings at Palmyra dating back to the Bronze Age.

Extraordinary place. Got to saunter around it a bit during the desert campaign under that lanky cunt Archie Wavell v the Frogs. Correct cunts. Frogs fighting for Hitler. The Libya/Syria campaign was a particularly vicious show against the Vichy Frogs. Not much publicised at the time so not to antagonise our glorious Free Frog allies. Slap bang in the middle orf Syria and now surrounded by aforementioned ISIS wog cunts who use it to finance their scummy little schemes, genocide/world domination ect ect by flogging orf treasures piecemeal. Poor old Khaled Asaad, now Head(less) orf Antiquities at Palmyra having lorst his loaf after refusing to reveal after a month orf torture where the prize pieces were hidden.

In truth these ISIS cunts give our honourable calling a bad name. “How unfortunate, crimes against humanity ect ect, but we are powerless to do anything” bleat the limp listless liberal EU/ UN inbreeds like the Dutch, the Irish and the Dagos. Type orf cunt that will make a risk assessment before taking a piss in the desert. These cunts admit this is where huge chunks orf ISIS cashola is coming from aided and abetted by the world wide black market in antiquities fuelled by Chinko and Russkie money. Simple answer stop wasting time attempting to protect wog civilian cunts various and erect a ring orf steel around the ancient sites instead. Cut orf their money supply. You know it makes sense.

Be oit there meself quick as a wog up a camel’s arse if only I could find condoms big enough (for me shotgun cunts – keeps the sand oit me barrels).