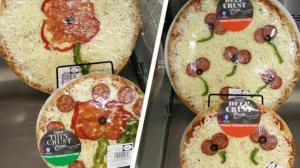 “In Flanders Fields the salami blow, between the cheeses, slice on slice…”

Tesco are (as we know) monumental cunts. But their latest tasteless sales scheme takes the absolute piss… A Rememberance Pizza? With two pieces of pepperoni and an olive representing a poppy? If the lads who fought for Blighty all those years ago could see what Britain would become in 2014, I don’t think they would have bothered…

Tesco are indeed monumental cunts for this. I’m only surprised they didn’t market it with an even more tasteless tagline. If they could get away with selling barbecues to commemorate the bombing of Hiroshima I’d bet they would do it.

Tesco were of course quick to lay the blame on “rogue employees”. (yeah… right!). Apparently the twatter crowd were quick to join in with mindless quips, which considering anyone who uses Twitter is a cunt beyond redemption comes as no surprise I suppose.

And this from “The Independent” …

As the image spread on Twitter people were quick to make fun, commenting things like ‘lest we forget the anchovies’ and accusing the supermarket of cashing in on a day of mourning.

“Colleagues in stores have been marking Remembrance Sunday in a number of ways and we hope customers see that their intentions in this case were entirely borne out of respect,” a Tesco spokesperson pleaded.

This is 2014 though, expect several thousand more tweets and a full apology by 5pm.

6 thoughts on “The Tesco Remembrance Pizza”