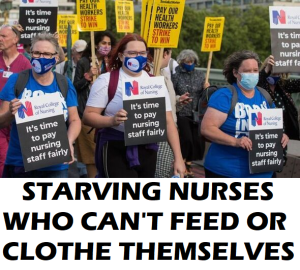 Clap our hands, smash those bedpans together, and – nurse! – the screens as I dare to cunt those “angels”, the nurses. The poor overworked darlings with their bustling 50 inch arses, which look as if they were designed by the man who designed the Standard Vanguard Mark One, are going on strike, because the poor darlings (according to the Daily Mirror and the BBC, which are really the same thing) are so hungry they subsit on patients leftovers:

For years some of these bovine wimminz and fruity men have traded on the “angels” trademark, as though they were a cross between Mother Theresa and Shirley Eaton from Carry On Nurse (Nurse Bell, Ding-Dong, Carry On). In reality they are just as grasping as any other occupation, some are very good indeed but many of the lazy bleeders hide behind them. I have a nurse as a neighbour who never misses an opportunity to go sick, because of her menopause., or her granddaughter needs to be looked after while mum has a spa day.

As for eating the patients food, the size of some of them probably means that the Food Bank can’t fully meet their demands for filling their faces all day. How did people do before Food Banks were invented ?. After I first left the RN some of the jobs I did were very low paid, and with a young wife (who luckilly didn’t eat as much in those days and the only daytime TV was Play School, Bill & Ben, occasional racing from Kempton Park and schools broadcasts) to support and then a baby son, I sometimes had two jobs – daytime and evening, and we were poor – I am not saying that the mice went around in overalls, but we were poor, but my pride would not have allowed me to take free food or anything else off anybody. No child allowance for single children in those days. Hence the evening job.

I refuse to accept that ANY nurse has any need for these ridiculous Love On the Dole antics, unless they spend a lot of time in high end fashion outlets and buy their groceries from Fortnum and Mason.

These people are going out of their way to beg for sympathy and for that reason I cunt them as total f***ing union and political malcontents who are using strike action as a weapon to get the sodding Labourn party into power.

And attending is Chuff Chugger with this:

I second this nom.

it is now a fallacy to believe medical staff are not well paid, and even if they were, then they fucking choose that career. If I complained to my mates down the pub I wasn’t getting paid enough, they would rIghtly say ‘well, fuck off and do something else then’

Here’s an NHS link to curreny vacancies and even the lowly of the low are starting on near £22k up North.

I don’t see any ‘poorly paid’ jobs there. It’s all bollocks……and quite frankly compared to the days when carry on films were made in real hospitals with real nurses all of which were minxy and wear stilletto heels and black stockings, todays nurses aren’t a patch on them.

…as for clapping people for doing the job they are getting paid for is taking the piss. But they were working during covid and putting themselves at risk I hear you say…….errrr yes, thats the sole purpose of a fucking nurse- to make ill people better. Not, I won’t be in for work today, because there’s a lot of covid around’ FFS

In support of the ‘POOR’ NURSES nomination

My mother was a State Registered Nurse and member of the RCN in the 1950s at a time when nursing was a vocation and paid pin money.
This morning there’s bitter wind blowing here from the Scottish border hills where we scattered her ashes. I reckon it’s my mum showing her utter disgust at the many members of her profession who are putting their own greed above caring for others, for which they are already well rewarded today.