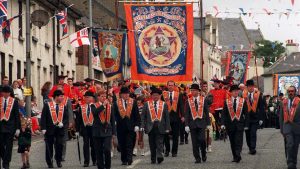 This story involving the members of an Orange lodge at a Jubilee party singing a song, I couldn’t understand a fucking word of it, but apparently it’s all about a woman who was murdered on honeymoon in Mauritius years ago

now as distasteful as this ditty was, is it any worse than what Sinn Fein IRA would sing about at their social gatherings, I think NOT, the Orange order might be just the Protestant version of the Freemasonry, but this is no more than banter really,

if you’re offended don’t watch, simple as that, as I said previously if the Fenians sang songs about Lord Mountbatten or Ian Gow, would we have heard about it?

48 thoughts on “Orange Order – Out of Order”