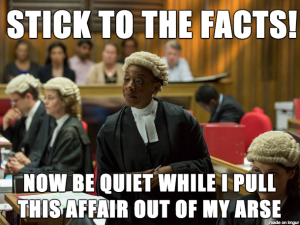 Yes, the cunts keeping criminals and jihadis safe and warm in the UK.

Priti has upset the fuckers.

”Earlier this week Priti Patel claimed the suspect, Emad Al Swealmeen, who lodged an appeal when his asylum claim was rejected after arriving in the UK, had been able to exploit Britain’s “dysfunctional” immigration system by staying in the country.
Lawyers raised concerns about her “blaming the legal services industry” for the suspected hospital bomber still being in the UK.”

Well who do we blame? Fucking vultures with no loyalty or scruples who earn their living off these poor ‘asylum seekers’. The half baked church which doesnt question why it’s services are full of assorted Arabs, Iranians and Somalis, as advised by their lawyers. The church is just fucking gullible. The system is abused by the legal cunts, aided and abetted by woke fucking halfwits who trust the motives of these poor immigrants rather than wondering why everyfucking where they come from is a violent shithole.

So for once, Priti Patel has it right. The lawyers are the scum of the earth and directly responsible for acts of terror, violence, drug dealing and murder carried out by their charges.