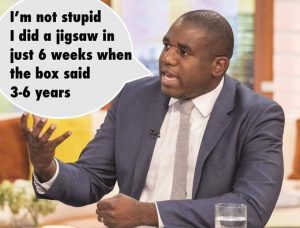 Fat, racist cunt David Lammy loves to play the victim card. But he’s pissed off a group that, historically, has often been deprived of equal rights…

Apparently, biological women (AKA, women) who don’t want to get undressed in front of Quagmire’s Dad or have some hairy-arsed, five ‘o’ clock shadowed cunt with an Adam’s Apple the size of a golf ball using the same toilets as their underaged daughters are “dinosaurs” who “hoard rights.”

Fuck off, Lammy, you stupid thick wanker. Seems to me, women should be entitled to single sex spaces and neither you nor the Christopher Biggins lookalike who allegedly leads your party should be able to dictate to women about female issues. Oh, and fuck you.

Never thought I’d have sympathy for old school feminists but it is very noticeable that it is always men trying to force their way into female sports, toilets, changing rooms rather than vice versa. Funny that.

Nominated by: Conduit of Evil