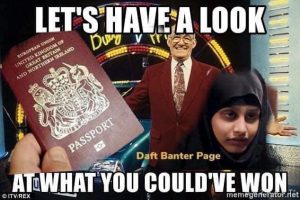 Why can’t Boris get this cunt slotted? Seems easy enough to me. Anyhow can we all chip in to pay for the bullet?

And this from Nawaz

For those two reasons he is a massive cunt

And helpful link and support by  Hard Brexit Cunt

Here’s a link to Maajid Nawaz on LBC saying that the “UK should ‘do the right thing’ in Shamima Begum case”.

In my opinion, doing the right thing means filling in Begum’s cunt so that she can’t drop any more sprogs and then burying her up to her neck in ISIS territory so that her peaceful brothers can stone her to death for being a slapper.

On this link, there is also a clip of that massive cunt James O’Shithead saying that he believes that a politician should not be able to remove British citizenship from anybody. Hasn’t this prick heard of the Doctrine of Parliamentary Sovereignty which means that Parliament alone has the right to make and unmake laws and that no Parliament may bind a future Parliament?